Atlantic Lithium Limited (AIM: ALL, OTC: ALLIF, “Atlantic Lithium” or the “Company”), the fully-funded, African- focussed lithium exploration and development company on track to become West Africa’s first lithium producing mine, is pleased to announce a significant Mineral Resource Estimate (“MRE” or the “Resource”) upgrade to 30.1Mt at 1.26% Li2O for the Ewoyaa lithium deposit (collectively the “Ewoyaa Project” or the “Project”) within the Cape Coast Lithium Portfolio in Ghana, West Africa. The Resource is reported in accordance with the JORC Code (2012).

“We are delighted to have increased the Ewoyaa Resource by a further 42% to 30.1Mt at 1.26% Li2O and will continue to grow this robust project with ongoing drilling programs. Our goal was to increase the Resource to support a >12-year mine life and to convert >80% of the previous resource from Inferred to Indicated status. We have comfortably achieved both goals, demonstrating the robust geological fundamentals of the Project.

“With the commencement of additional resource, and exploration drilling along strike and at depth, we are confident of further resource upgrades.

“In conjunction with the ongoing drilling, mining studies in support of the Pre-Feasibility Study are well advanced.

“The Resource is exceptionally well located, being only 1km from the sealed national highway and 110km from the operating deep-sea port of Takoradi with adjacent grid power; it is challenging to find other lithium pegmatite projects better located.

“Delivery of the upgraded 30.14Mt at 1.26% Li2O Mineral Resource Estimate including 20.5Mt at 1.29% Li2O in the Indicated category, is an important de-risking milestone for this industry standout project. With Ewoyaa being fully funded to production through our agreement with Piedmont Lithium, this upgrade highlights the exceptional potential of the project and the value that it brings to the Company.”

An upgraded MRE of 30.1Mt at 1.26% Li2O was completed for the Ewoyaa deposit and surrounding pegmatites; collectively termed the “Ewoyaa Project”. The Mineral Resource is reported in accordance with the JORC Code (2012). The MRE includes a total of 20.5Mt at 1.29% Li2O in the Indicated category and 9.6Mt at 1.19% Li2O in the Inferred category (refer Table 1).

Resources is reported in line with requirements of the JORC Code (2012) and is therefore suitable for public reporting. 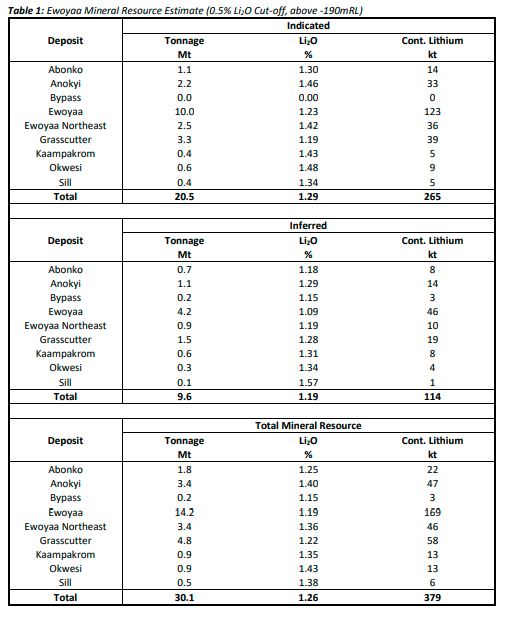 The Mineral Resource Estimate has been compiled under the supervision of Mr. Shaun Searle who is a director of Ashmore Advisory Pty Ltd and a Registered Member of the Australian Institute of Geoscientists. Mr. Searle has sufficient experience that is relevant to the style of mineralisation and type of deposit under consideration and to the activity that he has undertaken to qualify as a Competent Person as defined in the JORC Code.

All Mineral Resources figures reported in the table above represent current estimates. Mineral Resource estimates are not precise calculations, being dependent on the interpretation of limited information on the location, shape and continuity of the occurrence and on the available sampling results. The totals contained in the above table have been rounded to reflect the relative uncertainty of the estimate. Rounding may cause some computational discrepancies.

There are four main geometallurgical domains at Ewoyaa; coarse-grained type P1 and finer-grained type P2 pegmatites and their weathered equivalents. Their estimated relative abundances, metallurgical recoveries and concentrate grades are shown in Table 2. 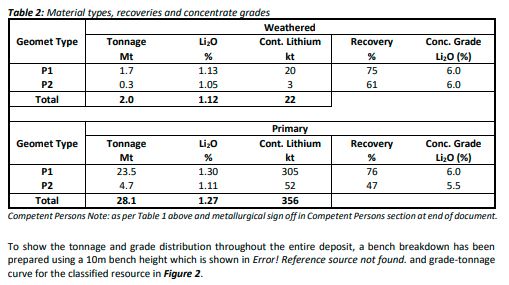 To show the tonnage and grade distribution throughout the entire deposit, a bench breakdown has been prepared using a 10m bench height which is shown in Error! Reference source not found. and grade-tonnage curve for the classified resource in Figure 2. 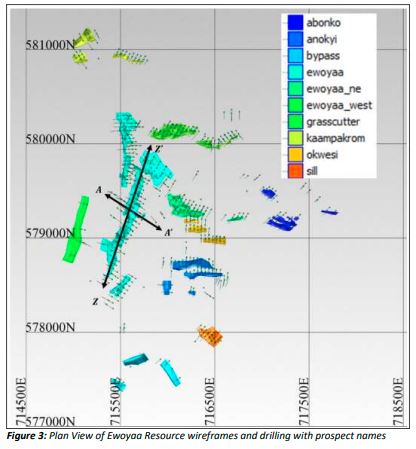 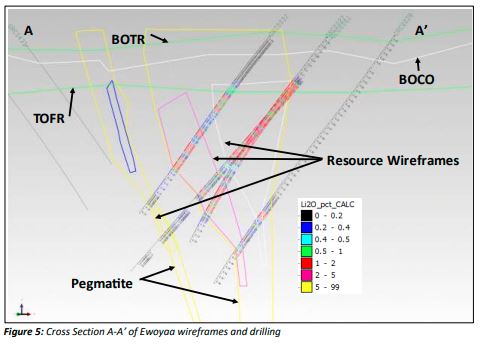 The current MRE is based on a 0.5% reporting cut-off grade (constrained to above the -190mRL), within a 0.4% Li2O wireframed pegmatite body. However, when assessing all pegmatite volumes (with no cut-offs applied), there is significant scope to increase the resource tonnage. Table 3 below shows the overall resource tonnage and grade for the deposit, inclusive of all pegmatite material. For example, the resource can be reported at a significantly larger tonnage by reducing the cut-off grade to 0.2% Li2O, giving an increased resource of 39.3Mt at 1.02% Li2O. Conversely, the resource can be reported at a higher grade using a 0.8% Li2O cut-off for a resource of 27.8Mt at 1.31% Li2O. 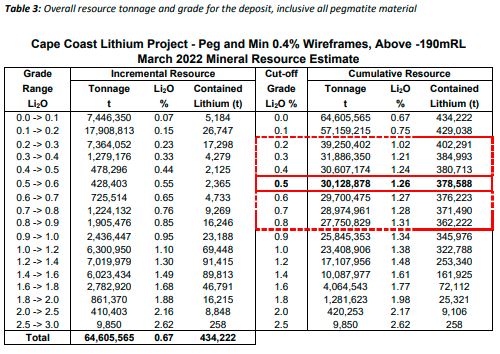 Pegmatite intrusions generally occur as sub-vertical dykes with two dominant trends: either east-southeast (Abonko, Anokyi, Ewoyaa Northeast, Grasscutter, Kaampakrom and Okwesi) dipping sub-vertically northeast; or north-northeast (Ewoyaa Main) dipping sub-vertically to moderately to the east. Pegmatite thickness varies across the Project, with thinner mineralised units intersected at Abonko and Kaampakrom between 4 and 12m; and thicker units intersected at Ewoyaa Main between 30 and 60m, and up to 100m at surface.

DD drilling data. Drill hole spacing is predominantly 40m by 40m in the well-drilled portions of the Project and up to 80m by 80m to 100m by 100m across the breadth of the known mineralisation.

The RC drilling used a combination of 5.25’ and 5.75’ face sampling hammers. The DD used PQ and HQ (85mm and 63.5mm) diameter core barrels. The DD holes were completed from surface or as tails with PQ to maximise recovery in weathered zones, with reversion to HQ once ground conditions improved within fresh material.

During Phase 1 and 2, RC drilling bulk samples and splits were collected at the rig for every metre interval drilled, the splits being undertaken using a riffle splitter. During Phase 3, Phase 4 and Phase 5, RC samples were split with a rig mounted cone spitter, which took duplicate samples for quality control purposes.

DD was cut with a core saw and selected half core samples totalling 427.1kg was dispatched to Nagrom Laboratory in Australia for preliminary metallurgical test work.

All Phase 1 samples were submitted to SGS Tarkwa for preparation (PRP100) and subsequently forwarded to SGS Johannesburg and later SGS Vancouver for analysis (ICP90A).

Since December 2018, samples have been submitted to Intertek Tarkwa (SP02/SP12) for sample preparation. Samples were weighed, dried and crushed to -2mm in a Boyd crusher with an 800-1,200g rotary split, producing a nominal 1,500g split crushed sample, which was subsequently pulverised in a LM2 ring mill. Samples were pulverised to a nominal 85% passing 75µm. All the preparation equipment was flushed with barren material prior to the commencement of the job. Coarse reject material was kept in the original bag. Lab sizing analysis was undertaken on a nominal 1:25 basis. Final pulverised samples (20g) were airfreighted to Intertek in Perth, Australia for assaying.

Since December 2018, samples were sent to Intertek Laboratory in Perth for analysis (FP6/MS/OES). FP6/MS/OES is an analysis for lithium and a suite of 21 other elements. Detection limits for lithium range between 5ppm and 20,000ppm. The sodium peroxide fusion (in nickel crucibles) is completed with hydrochloric acid to dissolve the sub-sample and is considered a total dissolution. Analysis is conducted by Inductively Coupled Plasma Mass Spectrometry (“ICP-MS”).

Prior to December 2018, Phase 1 samples were submitted to SGS Johannesburg and later SGS Vancouver for analysis (ICP90A). ICP90 is a 28-element combination Na2O2 fusion with ICP-OES. ICP-MS was added to some submissions for additional trace element characterisation purposes.

The Ewoyaa lithium deposits show good continuity of the main mineralised units which allowed the drill hole intersections to be modelled into coherent, geologically robust domains. Consistency is evident in the thickness of the structure, and the distribution of grade appears to be reasonable along and across strike.

A Surpac block model was created to encompass the extents of the known mineralization. The block model was rotated on a bearing of 30°, with block dimensions of 10m NS by 10m EW by 5m vertical with sub-cells of 2.5m by 2.5m by 1.25m. The block size was selected based on results of Kriging Neighbourhood Analysis (“KNA”) and also in consideration of two predominant mineralisation orientations of 30° and 100 to 120°.

The parent block size was selected based on KNA, while dimensions in other directions were selected to provide sufficient resolution to the block model in the across-strike and down-dip direction.

Bulk densities ranging between 1.7t/m3 and 2.78t/m3 were assigned in the block model dependent on lithology, mineralisation and weathering. These densities were applied based on 9,725 bulk density measurements conducted by the Company on 65 DD holes and 35 RC holes with diamond tails conducted across the breadth of the Project. The measurements were separated using weathering surfaces, geology and mineralization solids, with averages assigned in the block model.

The Statement of Mineral Resources has been constrained by the mineralisation solids and reported above a cut-off grade of 0.5% Li2O. The reporting cut-off grade is supported by a high-level Whittle optimization.

Mining and Metallurgical Methods and Parameters

The Statement of Mineral Resources has been constrained by the mineralisation solids, reported above the – 190mRL and a cut-off grade of 0.5% Li2O. Whittle optimisations demonstrate reasonable prospects for eventual economic extraction above the -190mRL. Preliminary metallurgical test work indicates four main geometallurgical domains; weathered and fresh coarse-grained spodumene-bearing pegmatite (P1) and weathered and fresh medium-grained spodumene-bearing pegmatite (P2). From test work completed to date at a 6.3mm crush, the P1 material produces a 6 to 6.6% Li2O concentrate at approximately 70 to 85% recovery (average 75% recovery), whilst P2 material produces 5.5 to 6% Li2O concentrate at approximately 35 to 65% recovery (average 47% recovery). Further geological, geotechnical, engineering and metallurgical studies are recommended to further define the lithium mineralisation and marketable products.

JORC Table 1, Section 3 (Estimation and Reporting of Mineral Resources) is included in Appendix 2.

Information in this report relating to the exploration results is based on data reviewed by Mr Lennard Kolff (MEcon. Geol., BSc. Hons ARSM), Chief Geologist of the Company. Mr Kolff is a Member of the Australian Institute of Geoscientists who has in excess of 20 years’ experience in mineral exploration and is a Qualified Person under the AIM Rules. Mr Kolff consents to the inclusion of the information in the form and context in which it appears.

Information in this report relating to Mineral Resources was compiled by Shaun Searle, a Member of the Australian Institute of Geoscientists. Mr Searle has sufficient experience that is relevant to the style of mineralisation and type of deposit under consideration and to the activity being undertaken to qualify as a Competent Person as defined in the 2012 Edition of the ‘Australasian Code for Reporting of Exploration Results, Mineral Resources and Ore Reserves’. Mr Searle is a director of Ashmore. Ashmore and the Competent Person are independent of the Company and other than being paid fees for services in compiling this report, neither has any financial interest (direct or contingent) in the Company.

Information in this report relating to metallurgical results is based on data reviewed by Mr Noel O’Brien, Director of Trinol Pty Ltd. Mr O’Brien is a Fellow of the Australasian Institute of Mining and Metallurgy (AusIMM) and has sufficient experience which is relevant to the style of mineralisation and type of deposit under consideration and to the activity which he is undertaking to qualify as a Competent Person as defined in the December 2012 edition of the “Australasian Code for Reporting of Exploration Results, Mineral Resources and Ore Reserves” (JORC Code). Mr O’Brien consents to the inclusion in the report of the matters based upon the information in the form and context in which it appears.

This announcement contains inside information for the purposes of Article 7 of the Market Abuse Regulation (EU) 596/2014 as it forms part of UK domestic law by virtue of the European Union (Withdrawal) Act 2018 (“MAR”), and is disclosed in accordance with the Company’s obligations under Article 17 of MAR.

Atlantic Lithium (formerly “IronRidge Resources”) is an AIM-listed lithium company advancing a portfolio of projects in Ghana and Côte d’Ivoire through to production.

The Company’s flagship project, the Ewoyaa Project in Ghana, is a significant lithium pegmatite discovery on track to become West Africa’s first lithium producing mine. The project is fully funded to production under an agreement with Piedmont Lithium for US$102m and set to produce a premium lithium product. A robust update Scoping Study indicates Life of Mine revenues exceeding US$3.4bn. Atlantic Lithium holds a 560km2 & 774km2 tenure across Ghana and Côte d’Ivoire respectively, comprising significantly under-explored, highly prospective licenses.

Cultured Meat: From Cells to Plate