How to Defrost Samsung Icemaker? 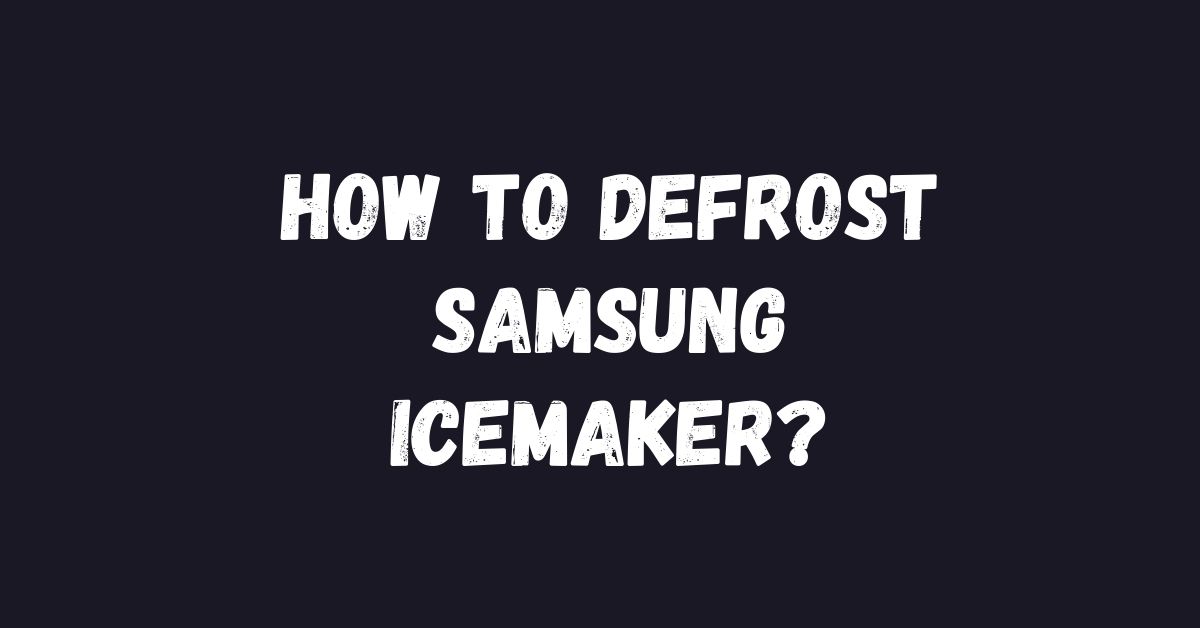 Samsung produces and manufactures some of the best household appliances, completely loaded with top-of-the-line features and beautiful designs, not to mention the over-the-top connecting options and Smart features; the latter of which is ridiculed on the internet for churning out things like the SmartFridge, which supposedly comes with a hefty processing unit and memory to run all those SmartApps that Samsung is known wide for. Either way, the point of all this banter is to establish one thing: Samsung is cramming its technologies developed in its mobile division into unsuspecting household devices that were fine without giant touchscreens or power-hungry processor. Which brings us to the topic of this passage; how to defrost Samsung icemaker?

You’d think that an icemaker, which was previously quite a spartan accessory for fridges or water-dispensers and rarely saw technological advancements other than turning out ice quicker, would need a ‘Smart’ infusion, but no, Samsung decided early on during the development phases of its icemaker to give it the ‘Galaxy treatment’. A multi-purpose screen, buttons and a processor to run and manage the device. But that’s not all. Samsung’s icemakers come with its SmartFridge models and also with its water dispensers. And since they all share the same function but different platforms, there are different ways to answer the question how to defrost Samsung icemaker.

Three devices are the primary recipients of this issue and its accompanying solutions; the first is the original and standalone icemaker, the second one is the SmartFridge with the icemaker option and the third is the icemaker integrated in the water dispenser. All three have different detection methods (of frost or icing issues), different troubleshooting methods and different solutions. All three will be discussed in this passage and all the troubleshooting methods will be discussed as well.

One of the most common issues with icemakers is that they frost over, causing either underproduction of ice or complete failure to operate at minimal energy cost, leading to the icemaker not producing ice at all. This issue is frequent and plagues a lot of Samsung household appliance users, not to mention the other problems faced by owners of SmartFridges or water dispensers.

Either way, other problems of these appliances include,

These problems, along with the frosting one, are common and have some pretty simple solutions, that will be listed below.

According to many threads on such forums and Samsung’s own website, the integrated icemaking unit on its fridges (including the SmartFridge) most commonly has this issue, where the internals frost over, especially if the compressor is left working for long periods of time without subsequent consumption of the ice that is then available in the tray. Anyhow, the solution is quite simple and is explained below,

The first troubleshooting step is to reset the icemaker (or the fridge, if necessary). To reset, simply plug off the device for a couple of minutes and then plug it back in. The settings will be reverted and this might prompt the device to defrost itself if it detects abnormal quantities of ice in the tray or on the walls of the tray.

Once the reset has been done, the icemaker should itself defrost the parts it detects that need to be freed of ice. If not, there is still a second way to defrost it, which is called a manual defrost method.

This method should only be done if the automatic defrost or reset method isn’t working and after repeated attempts, the frost still seems to cling to the icemaker. In that situation, a manual defrost is required, which can be done by following the below-mentioned steps.

There are many ways to do a manual defrost, but we will discuss which should be done and which methods could end up damaging the icemaker.

The first step of manual defrosting is to grab a couple of towels and position them on the ice and at the bottom of the pan (ice tray). Using a hairdryer on Mid-High blower setting, start melting the ice on the surface and let it drip down for an hour or so before powering it back on. This should solve the frosting problem in the icemaker.

What you should not do during a manual defrost is use boiling water or steam to get rid of the ice or permafrost. The issue with such methods is that they can release water vapour or condensation, which in turn could liquify in the heating coils, further compounding the problem. So, we would advise against it (not to mention Samsung’s official website, which also forbids users from doing so).

If the problem still persists, you might need to call a Samsung technician to help you out and bring the device back to its original performance. Or you could perform a forced defrost, which works with all three types of icemakers.

Performing a Forced Defrost on the Samsung Icemaker

This method is pretty complex but works with all icemakers from Samsung that have a screen and six buttons on the interface of the appliance. This forced defrost has oftentimes been called as the method only known by Samsung tech personnel or reps that come in to fix that stuff and is the final way to get rid of frost in the icemaker. If the problem still persists after a forced defrost has been performed, it might be time to take it to the centre (if it’s a standalone unit) or call the Samsung tech help to service or replace the unit (if deemed necessary).

Here’s how to perform a forced defrost on Samsung icemaker (fridge, attached to water dispenser or standalone unit).

This is one of the primary methods of defrosting an icemaker with a button panel and an interactive screen. If the icemaker is simple and does not come with such add-ons, you will need to repeat the manual defrosting methods to get all that out of the system and make sure to not use boiling water or steam to do away with it; this will further exacerbate the issue.