How To Delete A Page On Google Docs? 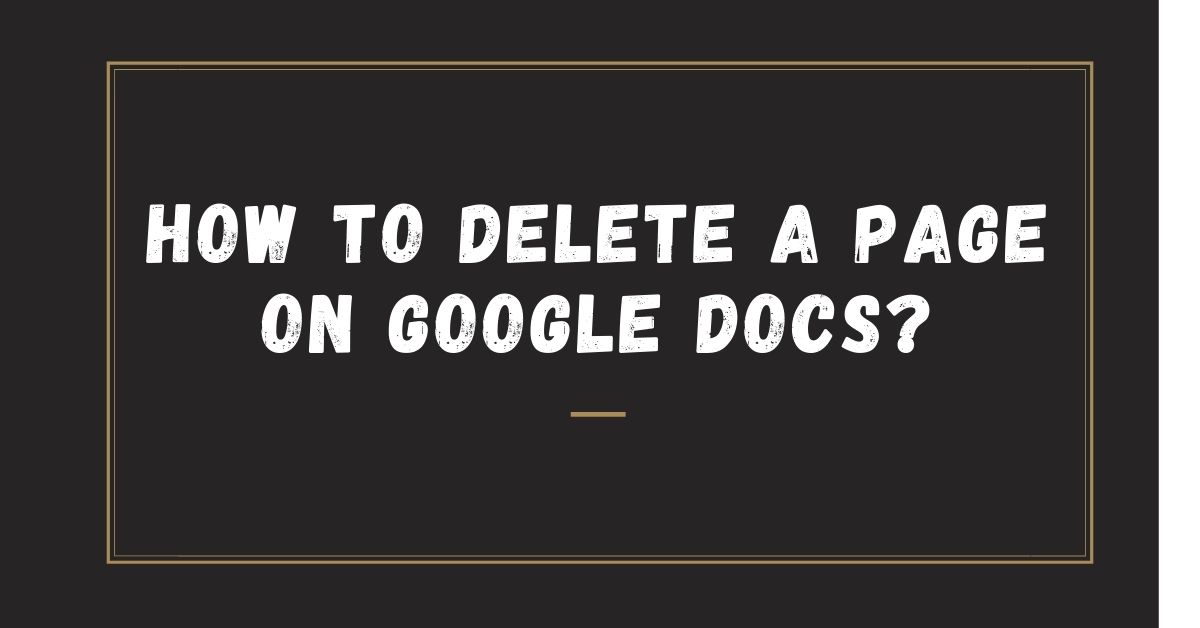 Google Docs is an excellent word processing software provided by Google as part of the suite of services they provide for free. However, with that being said, it has still a long way to go to reach the usability and customer acceptability levels that Microsoft’s Word has achieved over the two or so decades that it has been under use by offices, students and government officials alike. If we were to pit each other, Word would definitely come out on top, but that isn’t saying that Google Docs is anything less than an amazing word processing software, not to mention its incredible cloud capabilities and the way it converts .docx files and other formats with so much ease. But navigating around Docs is difficult, which leads to some confusion whilst performing simple functions. For instance, how to delete a page on Google Docs?

While intermediate users of Microsoft Word will be able to answer this question if the same were to be applied to said software, but users frequenting Google Docs still have a hard time navigating between its various functions (despite the fact that the two share a remodeled interface that makes it easier to use both). The purpose of this passage is to get you up to speed on how to delete a page on Google Docs, which is apparently a task that can’t be found on the Docs’ ribbon but can be found on chat boards and tech threads on the internet. Brilliant.

Much of the functionality and interface is shared among the two software, so you could try to delete a page on Google Docs the same way it is done on Microsoft Word (if you are proficient at using the latter). Regardless of that, here are some of the ways you can go about deleting a page on Google Docs while using one.

Also Read: How to Track Changes in Google Docs

How to Delete a Page on Google Docs

Deleting a text-heavy page and an empty page (with a page break) on Google Docs requires different methods to take. As such, we will be discussing each so that no stone is left unturned.

There are basically two different types of documents you can edit on Google Docs. One is a native document, one whose origin is Docs itself, while the second one is a document imported from any other word processing software, like Word. For the native document, deleting a page is easy. All you would need to do is locate the extra page which needs to be deleted. If it has text on it that needs to be deleted as well, simply select it and press Del (Delete) or Backspace. This will clear up the text. Now, for that page, you will need to click and drag the cursor from the end of the second last page to the start of the page you want to delete. This will create a blue-ish square of selection on both the pages. Press Del or Backspace and the page will be deleted and the second-last page will become the alst page. It’s that easy.

Deleting a Page on an Imported Document

If the document is not native and instead has been imported from another word processing document like Word, you will not be able to follow the native document method with this one, since the formatting will be carried over from the original version. As such, you will need to format the page break or the extra page from the original source. For example, if the document was originally created on Microsoft Word, you will need to open it using Word again, delete the page, and then save the document with said changes. Once it has been saved and the extra page has been deleted from it, open it with Google Docs and the extra page will no longer be there. It is a rather complicated step, considering you will have to switch back and forth between Word and Docs, but since both don’t support editing on a non-native document that alters the original formatting, this is currently the only way to do so.

Sometimes the extra page, whether it is a native or non-native document, isn’t actually an extra page, rather it is what is called a ‘page break’, a sort of barrier between two sections of the document put in to segmented the paper. However, this is no different than simply being an extra page; in fact, many like to call it a fancy way of saying an ‘extra page in the document’. Whatever the reason, page breaks can be dealt with the exactly same solution as before. Click and drag the cursor from the end of the second-last to the start of the page you want to delete. Again, it should create a blue square that is split between the two pages. Once this is selected, simply press Del or Backspace and the page break will be removed. For native and non-native documents, repeat the above-mentioned steps and you will be all set to go.

This issue is a bit technical and so is the solution for it. That is because this issue only occurs if a pre-loaded template has been used to edit a document. Since these templates are editable, it could happen that during editing and saving, a table, for instance, used for resumes or reports, could have been left behind, which could make it difficult for you to get rid of both the page and the table from the document. If that is the case and you do find the aforementioned methods to not work to delete a page from Google Docs, chances are there is an attachment on the page that isn’t visible. If that is the case, simply click on the page and select ‘Table properties’ on the ribbon above. Select Delete table and try the cursor select-and-drag method again. This will clear up the content on the page and you will be able to delete a page on Google Docs.