How To Enter BIOS In Windows 7: Explained 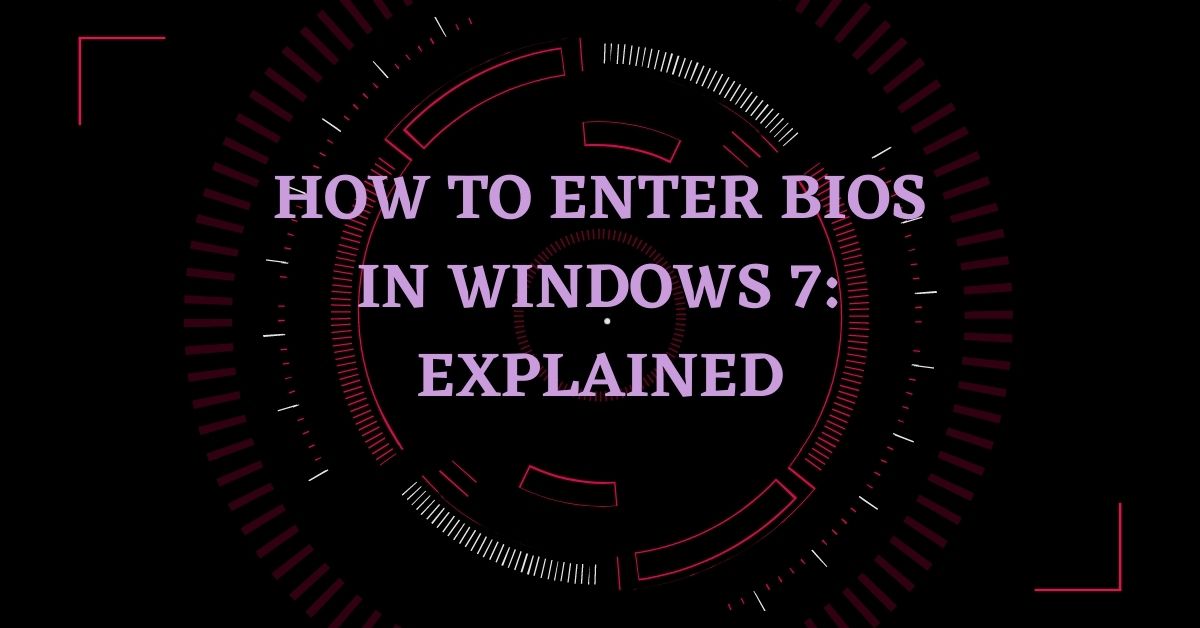 BIOS stands for Basic Input/ Output System and is used by the computer to self-diagnose and check the hardware of the system prior to starting up. As such, its responsibility is critical and the correct functioning of the BIOS is imperative for normal operation of the computer. However, the user can also access it to make some basic changes and inputs prior to booting the PC up, like changing the time or some internal passwords. So, as many fresh computer students ask, how to enter BIOS in Windows 7, now that gamers and geeks use the particular OS very often and praise it for its amazing hardware optimization.

There are two things to keep in mind when it comes to BIOS; the first one is that regardless of the model, company or even the operating system, BIOS will always be accessed when the computer system is booting up; not before or after. A good majority of computers, be they old or new, allow you to start or enter BIOS mode before the manufacturer or Windows logo shows up. The instructions can usually be seen on the bottom of the screen where the boot up is happening. This is the first point you need to keep in mind when learning how to enter BIOS in Windows 7.

The second point to keep in mind is that while the access window is always the same for every manufacturer and operating system, it’s the buttons you need to press to access BIOS mode that change with manufacturers. Since BIOS is a hardware process and not a software one, meaning that it is supplied and installed by the manufacturer of the PC (Dell, HP, Lenovo etc) rather than Microsoft (for WindowsOS). So, when manufacturers are different, the ways to access it would also be different and accessing BIOS is no different.

While the general area of keys used to access it are the Function keys (F1, F2, ……, F12), the keys themselves vary by manufacturers. Some use F1, some use F2 and others might ask for an F12 input. Whatever the input required, it is always displayed during the boot and you can press it then and there to go into BIOS. Now, on to how to enter BIOS in Windows 7.

Bear in mind that BIOS is incredibly important for a computer and unnecessary changes could drastically affect the running of the computer or could alter how it works with the software. Only access and use BIOS if necessary.

BIOS mode in Windows 7 can be accessed, like every other OS and manufacturer, before the Windows 7 start-up logo comes on the screen. Since it is a hardware check procedure, it cannot be done once the OS has been loaded on the RAM. If, for some reason, you miss the screen and the computer goes into boot mode, you’ll need to restart the computer and access BIOS once the Windows logo screen hasn’t showed up. Keep your eyes peeled for BIOS and system settings instructions at the bottom of the screen; they show up before the boot screen and is only there to let users access the BIOS screen.

So, to simplify the procedure to access BIOS mode in Windows 7, switch your computer on and press either F1, F2, F12, Del (Delete) or End to access BIOS mode. As explained beforehand, these keys vary by manufacturer but you don’t need to search it on Google or ask a friend who knows more about it than you do; before the boot screen comes up, instructions to access various hardware, software and kernel functions are constantly showed on the bottom of the screen when the computer is starting up and you can press said buttons then and there to go into BIOS mode.

To reiterate, BIOS mode is the basic system used by a computer for proper functioning. Unnecessary changes or changes that the user themselves is not aware or sure of should not be keyed on the BIOS mode. It could lead to altering of the computer functioning or could cause other unwanted effects.

A good majority of models and manufacturers supporting Windows 7 allow you to access BIOS mode by just the press of a single function key. However, various model years and hardware requirements change, not just the internals but also how the keyboards look and operate. For instance, many PC’s or laptops require you to press and hold the Function (Fn) key before tapping the numbered Function keys. Older models or ones with less functions might not require such an additional input. As such, this passage will identify various models, keyboard types and hardware settings that change how you can access BIOS mode.

In Dell computers and laptops, you will need to press F2 key to access BIOS just before the computer has booted and the OS is loaded on the RAM. While F2 is the primary key, using the above-mentioned method, you can determine whether or not you need to press and hold Fn key before hitting F2 and accessing the BIOS mode. Also, in some Dell hardware, the BIOS is actually referred to as the UEFI BIOS, which stands for Unified Extensible Firmware Interface BIOS.

In HP laptops and computers, the menu for accessing BIOS is usually tucked away in a separate menu screen called Startup Menu, which itself has a process for accessing. So, you first need to start up your computer. Once it has started up (not booted up), start pressing the Esc key in quick successions and repeatedly until the Startup Menu shows up. From the list of actions in the Startup Menu, navigate BIOS Setup, which can be accessed by pressing F10. Simply press F10 and you will be taken to the BIOS menu in an HP laptop or PC.

Also Read: How to Track Changes in Google Docs

Lenovo has a rather confusing method for accessing the BIOS menu, especially if you’re looking at two different PC’s from different eras. However, Lenovo has simplified the Fn+F1, F2 fiasco with their PC’s by allocating a simple color scheme over the entirety of their model lineage from the start. If the numbered function key row is blue or orange, you will need to press Fn. If not, you will just need to press either F1 (for models and Ideacentres after 2012) and F2 (for models before 2012 including Ideapad, Yoga and Flex models).

As for the rest of the manufacturers and PC’s, simply press F1, F2 or F12 to access the BIOS in Windows 7-supported hardware.