How To Track Changes In Google Docs 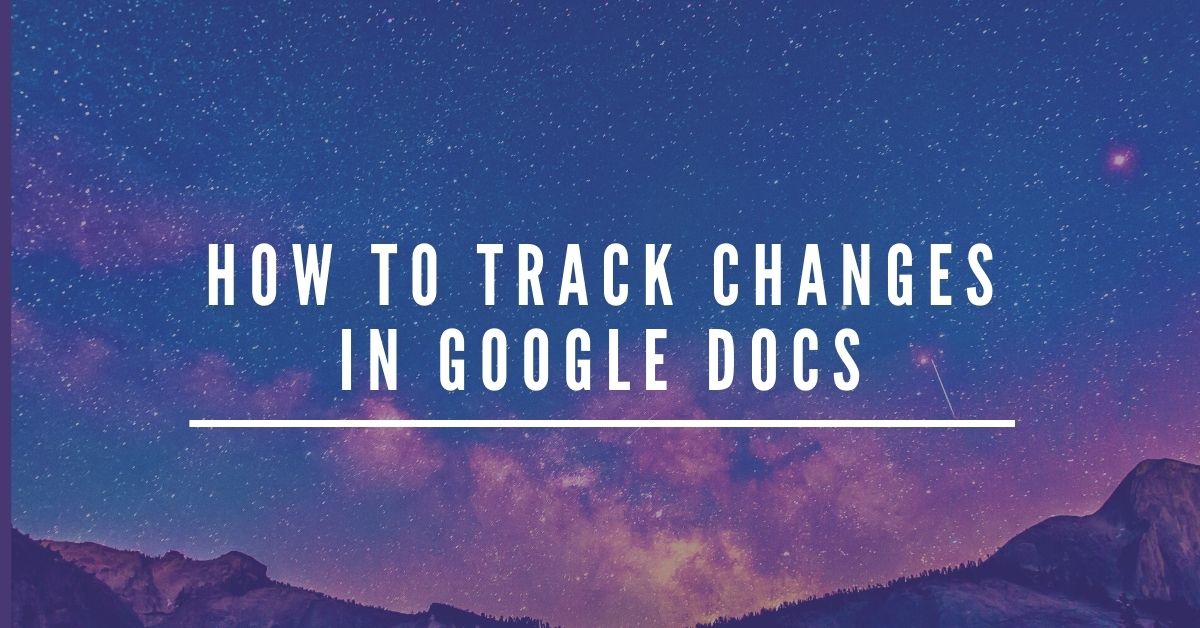 We’re all very familiar with Microsoft Word, one of the best and the longest-running word processing software given to us courtesy of Microsoft Office. However, when it comes to cloud-computing, Google has all the boxes checked and with their iterations of popular processing software like Docs, Slides and Sheets, they are catching up with Microsoft. But as of now, both work in harmony; for offline use, Word is the most intuitive and when we go online, Google Docs is there for us. But many features, like ‘Track Changes’ in Word, cannot be found in Docs. Here’s how to track changes in Google Docs.

Google Docs is one of Google’s best used software, able to process word documents with ease and providing a myriad of options for sharing, hyper-linking and whatnot. It seems as the perfect alternative for Word; for people not to keen on using Microsoft Office or simply running a bootleg version of Windows can use Google Docs without any loss of features or capabilities. With that being said, Word is still more intuitive and user-friendly than Google Docs; as such, many features that both the processors share are placed with varying ease of reachability in both, with Word coming out the winner.

How to Track Changes in Google Docs

So, the first thing you need to know about Google Docs is (if you are a Word user) that a lot of terminologies are changes in order to avoid a copy strike, which means that ‘Track Changes’ becomes ‘Revision History’ and many other titles are also switched. So, if you’re looking for ‘Track Changes’ in Docs, don’t bother. You won’t find it.

Also Read: How to Clip on Twitch?

If you’ve made a document in Docs itself and haven’t opened or edited it on any other software, this option is suitable as in a native document, Google Docs will not need to import revision data or any changes to the content and therefore will be better optimized. So, if you open a document on Google Docs, look for a pen with a downward arrow on the extreme right of the Docs interface. Hovering the cursor over it will reveal it to be the ‘Editing mode’. Click on it and a drop-down list will be displayed with three options; Editing, Suggesting and Viewing.

Remember how, in the start of this passage, it was stated that to avoid a possible copy strike, Google changed the name of the functionalities of Docs? Well, to track changes in the documents made from that point onwards, you need to click on the ‘Suggesting’ option, which states that ‘Edits become suggestions’. This is really a simple way of saying that any edit made in this document from this point on will be saved and recorded.

But that’s not all. Once you have it enabled, Docs will actively monitor and display any changes that will be made to the document; if it is a shared document, it will display the time, the user and the change that was made in the document. If it is not a shared document and instead is being updated over a long period of time, Docs will still track all changes and will display the date, day and the actual edit itself.

This is an extremely useful feature, regardless of its sharing status. In Microsoft Word, this feature is especially used in newspaper editing and vetting, where in order to gauge the article’s editing over the original document, editors routinely track changes to see how and which aspects of the article have been changed.

With Google Docs, you can take things up a notch with its sharing capabilities and tracking changes by each individual user and other relevant details. One of its most-used applications are academic papers, where a group paper, which is shared between two or more students, can be edited by anyone and with anything. So, it becomes imperative to see and track what changes have been made by which user and so on. 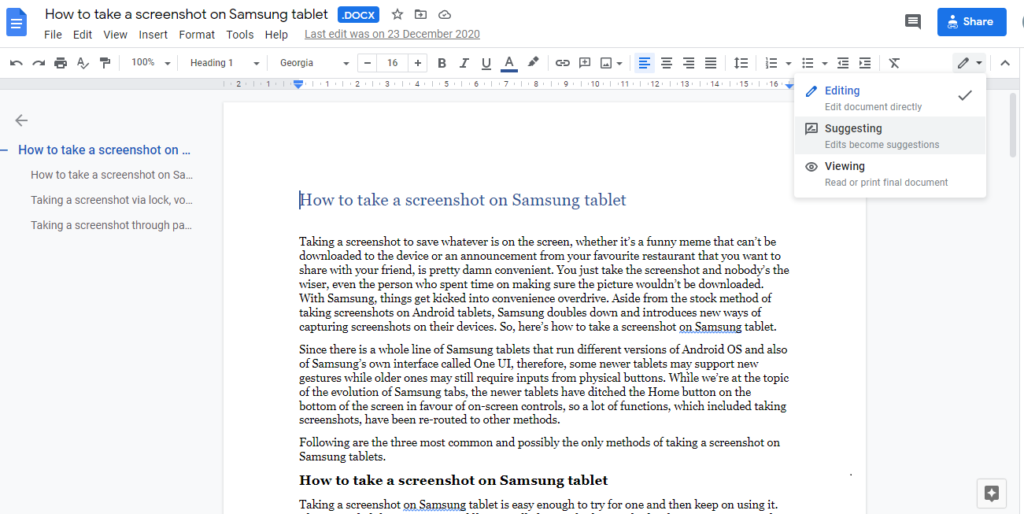 Your next question might be, ‘Well, what if I download a document from a source that I need to track changes on?’ Google has thought of that too, and Docs comes equipped with a feature that lets you track and display changes that might have been made on a previous version of the document. This means, whether its Microsoft Word, or Apple’s Pages, you can track what changes have been done on the document on there once you open the file on Google Docs.

There are a few things that you need to keep in mind before you use this function. The first and foremost is obviously to ensure that the document, which might’ve been edited on Word previously, should’ve had its ‘Track Changes’ option on and active. This creates several checkpoints that are embedded in the file details that helps Google Docs locate and display all the edits and changes. If this has not been done on the previous word processor, Google Docs will not show any changes or edits on the document and when prompted, will show it as a wholly-edited document.

To use this function of Google Docs, simply find and click on ‘File’, located directly beneath the title of the file. Click on it and a drop-down menu will show up. Click on ‘Version history’ and two options will be presented to you; ‘Name current version’ and ‘See version history’. To start tracking changes from this point onwards, click on ‘Name current version’, which will prompt you to type in a title and Docs will start recording and tracking changes. 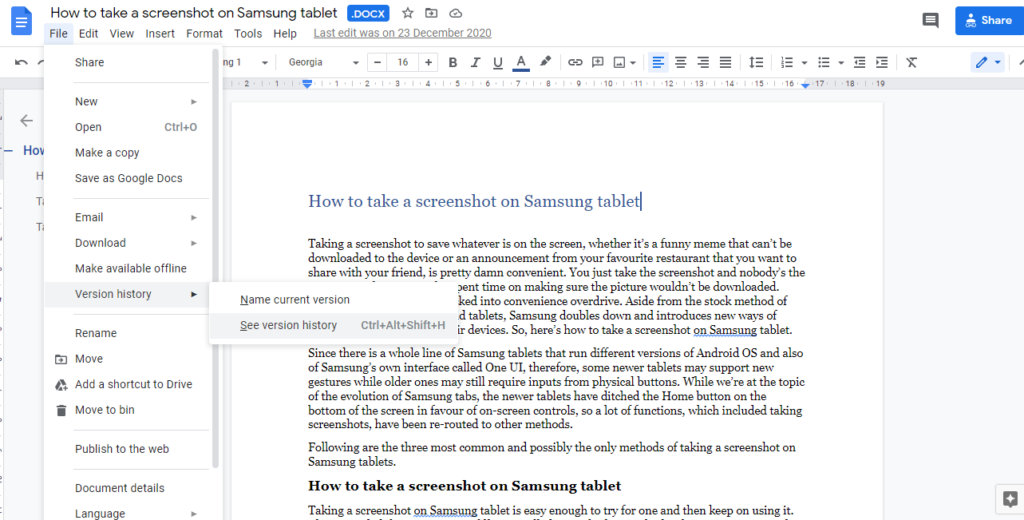 Why Should you Track Changes in Google Docs

The most common use of such a feature is academic settings, for example, a research paper or project being shared among a number of students or instructors. For example, since the entirety of the academic research and writing has shifted on computers and online resources, research papers and theses are now typed on computers and are shared among groups, primarily using Gmail, which by default opens the Word document in Google Docs.

Now, imagine being a part of a group with a shared paper and you spot a typing error that could’ve ruined the entire project. You want to know of the author who could’ve done it and either reprimand them or let them know of the error. Since the document is shared and many people access it to edit it, it is virtually impossible unless the person is really honest. Or, if you have enabled ‘Track changes’, you can forgo all that headache of going through the document again and again to point which section was whose and who did it wrong. The word processing document will do it for you, keeping track of changes that each and every user makes, until the original editor clears them all. That is really convenient.

But what if you receive the final iteration of the document from an outside source and the same scenario repeats itself. Since you aren’t the original editor and neither have you got access to the original file, it is very difficult to ascertain which user might have done the change. So, with this feature, you can pinpoint the user who might’ve made the change and can rectify it at the time.

With Google Docs, you get the additional benefit of having the resources to track changes even if a document is not native i.e. it has been imported or has been downloaded from an outside source. As explained in the second step, you can set the document in a way that it can track changes made from the previous user on the previous document but only if ‘Track changes’ had been enabled beforehand. Otherwise, it might not be feasible or won’t track changes at all and will simply start taking note of changes only when you click so.