How To Unlock Bootloader Samsung? 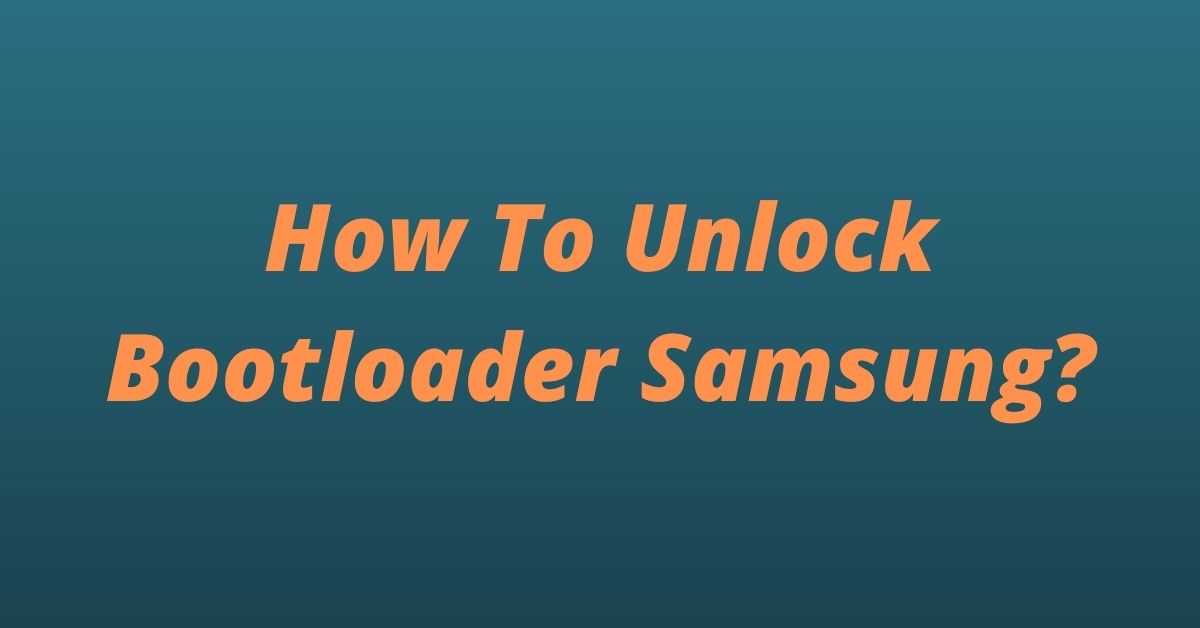 While Android runs just fine on Samsung (even better than the others, some might claim), gadget nerds and Android bootleggers will certainly appreciate the bootloader to be unlocked on their Android phones, which owing to its very open architecture and build, is actually really easy to pull off. But all this tech talk could overwhelm even the most seasoned veteran of the iOS vs Android war; its time to get in what is a bootloader, how they work on Androids and how to unlock bootloader Samsung?

A bootloader, as the name might lead you to believe, actually is a program that tells the device to load a certain OS or a kernel, and instructs the phone to either boot up or go to recovery screen. It is an incredibly basic part of a phone running Android OS and requires mastery of the kernel-based systems to unlock and subsequently alter it to your preference. This passage will run you up to the basics of bootloaders, how they operate and how to unlock bootloader Samsung.

What Actually is a Bootloader?

As mentioned beforehand, a bootloader on any device (laptop, smartphone, tablet) is a program or a line of code that instructs the device to run a certain operating system whenever the device is started up or booted up. It is a crucial piece of software that essentially tells the entire operating system or the kernel to run on the phone, or not to boot at all and instead go to device recovery mode, which is a barebones mode in a smartphone, tablet or laptop. Without a bootloader, a device running an OS can simply not boot up since it isn’t being directed which software to use or which mode to go into. Its that crucial to a device and that basic in its functioning.

Also Read: How to Factory Reset a Samsung Tablet?

What is meant by an Unlocked Bootloader on a Phone?

As basic and crucial a bootloader is to the phone or any device, really, where Androids take the cake from iOS, is the fact that the former has an incredibly open design architecture and a really modifiable custom OS, which contributes to its easy personalization and configuration. While leaving a bootloader so easy to control and alter might be a disadvantage for some purists, we say to them, get a style and personalize it the way you want. That’s how a phone is and should be, really. Customizable down to the last line of code. That is exactly what a bootloader unlocking is. You get access to the bootloader and in turn, you can customize and personalize how you want the device to boot up, which software changes you would like or what tweaks you can give to your own phone.

Androids are easy to customize and so is their bootloader, despite the fact that many manufacturers like Samsung and HTC don’t provide options like an unlocked bootloader when the device is new. But the truth stays the same. Unlocking your device’s bootloader reveals hosts of new customizations, upgradations and a whole menagerie of other edits that you can do your device’s OS. Which is really cool and makes us like Android even more than AppleOS.

With an unlocked bootloader, the possibilities are endless, but a few of them are listed below,

However, not all is good with bootloader unlocking. As many Android experts will tell you, the cons of unlocking a bootloader may sometimes outweigh the pros. Some of them are listed below,

How to Unlock Bootloader Samsung?

Samsung devices use Android too, so, you could argue that unlocking its bootloader might not be all that difficult or unachievable. While Samsung does ship its phones with One UI and a host of other security features like Knox protection system and other software and firmware protection codes, deep down, the Android architecture allows for users to unlock its bootloader and customize it however they wish. Following is a step-by-step guide of how you can unlock a bootloader of your Samsung device; whether it’s a smartphone like the S-series, a phablet like the Note series or a tablet (Galaxy Tab), you can unlock the bootloader of Samsung devices and personalize it how you like it. Here’s how it’s done.

Also Read: How to Take a Screenshot on Samsung Tablet

So, you start off by,

There are several other things you have to keep in mind. The first is that the ‘go through initial steps again’ method has to be done in order to ensure that the service and the device gets the correct info and to make sure that the device itself is in a good condition. If any of these conditions is not fulfilled or completed, this could brick the phone, so stay safe.

You can also ‘fastboot’ the phone, but that’s a topic for another day. Once you’ve done the business, the Samsung device will automatically reboot and you’ll have to wait for it to completely accept and run changes on it. Voila! Your Samsung bootloader has now been unlocked and customized.