Xenon comes across as an extremely rare and a heavy element of Group 18 (noble gases) of periodic table. It was, in fact, the very first noble gas found to have formed true chemical compounds. An interesting fact is that xenon is 4.5 times heavy as compared to air. This chemical element is tasteless, odourless, and colorless.

The most common application of xenon gas is that of lamps producing intense and extremely short flashes like stroboscopes and the lights to obtain high-speed photography. 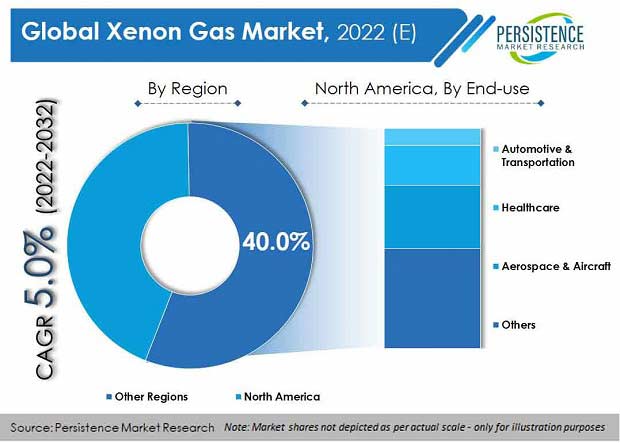 Xenon-based lighting system is primarily used in various hospitals all over for surgical operations. Xenon Chloride (XeCl) is the compound used in excimer lasers. They find their use in semiconductor industry. As far as plasma etching is concerned, the vacuum reactor is subject to high frequency/electrode-less microwave discharge. Xe gas (inert gas) is filled therein. It’s highly reactive. This results in generation of etching-active plasma. Samsung, since the year 2018, has been practicing 3D photolithography to cater to semiconductor industry.

All the chemical elements – helium, neon, xenon, krypton, argon – are inert/noble gases. Their combinations are being tried out to give better results in medical as well as non-medical vertical.

Xenon (noble) gas is known for acting as a remarkable propellant for electric ion propulsion system. Electric propulsion, right from satellite launches to the interplanetary operations, is a mandate for space exploration. The major advantage of using radioactive xenon is that weight reduction is enabled. Also, xenon gas is known promoting ionization. As such, it proves to be a good choice between heliocentric orbits. Russia, China, and the US launched majority of satellites till the year 2019. This demand for xenon gas is expected to catalyse the xenon gas market in the upcoming period.

At the same time, there are certain facts that should not go unnoticed. For instance – xenon gas being an asphyxiant, proves to be detrimental to health. In other words, excessive inhalation of this gas could result in vomiting, dizziness, nausea, or even death. The one who has lower oxygen levels could pass away within a few seconds, that too, without prior intimation. If a person has 25% of xenon and 75% of oxygen, the likelihood of he/she developing the above-mentioned symptoms can’t be ruled out. The U.S. Occupational Safety and Health Administration (OSHA) and European Industrial Gases Association (EIGA) has passed a resolution that places where gases like xenon, krypton, helium, and xenon are kept should not exceed 20-25%. They further state that in case of any ambiguity regarding oxygen level, the area should not be allowed to enter. Also, adequate ventilation should be employed for fresh air to enter.