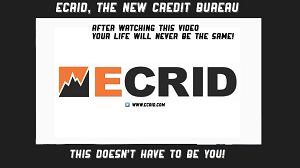 Having followed the lending industry there is a game changer and top business disrupter meant to provide control and savings related to your financial personal and business destiny and create a better playing field.  That’s ECRID (ECDD: Stock Symbol).

ECRID developed its own proprietary credit report with the intent to bring power to the people and is very differentiated from the 3 traditional credit bureaus that operate off a system that often does not have individuals, businesses, and families’ best interest at heart.

ECRID is the game changer credit bureau and at the same time it is a business with conviction. It supplies an easy-to-use web and mobile portal system. Throughout decades the legacy major credit bureaus have dominated the credit industry and controlled who got credit when applying to lenders and what terms and interest rates downstream were provided by those lenders to the consumer or business.

Equifax, Experian, and Trans Union are commonly known as the typical companies that provide a vantage score that determines the borrower’s fate. The good news with ECRID is there is now a pivotal and new credit bureau that is also a one-stop shop for members. ECRID is a company that cares, is diversified, and is led by industry veterans.

Most importantly, ECRID has a mission and vision to allow individuals a second chance to redeem themselves in a significantly shorter time than the mainstream credit bureaus. ECRID seeks to support and provide opportunity and savings to its member base, as well as allow income for referrals to friends, family, and colleagues as well.

The time has come for a borrower to get treated fairly when it comes to a mortgage, car, loan, and or lines of credit.   Further, ECRID (ECDD), a publicly traded company has a redemption component to allow you to start at the top versus the bottom.   We have a philosophy to allow a redemption back points system which is instrumental in equality lending.

Select companies like Experian have tried to offer a service attempting to mimic this format, but to no avail. ECRID is the first and best in its class of offering opportunity across age, race, and socio and economic class.

ECRID came to market to make an impact. The public company (ECDD) has created an innovative credit evaluation platform within the “fin-tech” industry providing both a second chance to establish a new creditworthy history as well as to even the playing field of opportunity to allow swift participation directly for individuals, families and business in their financial abilities and outcome potential.    Also, the company is one that rewards and pays it forward for referrals.  This one stop shop model provides the flexibility and opportunity to get approved for fair financing across a variety of sectors through the ECRID Lending Division based on their ECRID Credit Report. www.ecrid.com  ECDD: Stock Symbol